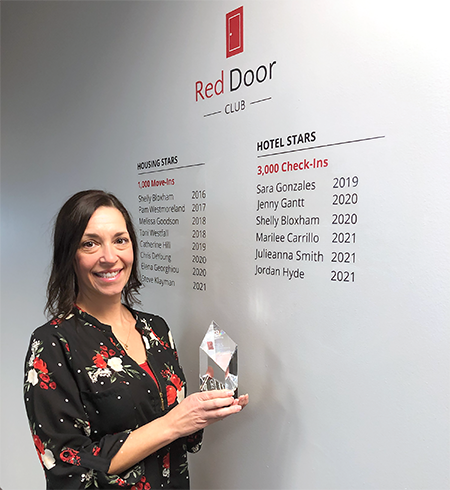 Currently a Hotel Customer Claims Specialist, Shelly’s first role with CRS in 2002 was as a Residence Specialist (RS). After working successfully in the RS position for 10 years, Shelly transitioned to a Housing Specialist, which handled both hotels and housing. During her tenure at CRS, she also became a Luxury Provisions RS for a few years before returning to the role of Hotel Specialist.

One of Shelly’s grandest accomplishments, and she is the only CRS employee to hold this honor, is that her name is on the Red Door Club wall for BOTH hotels and housing. In 2016, she was the first inductee into the Red Door Club for 1,000 move-ins. After switching over to the hotel team, Shelly became the 3rd member of the Red Door Club to achieve 3,000 check-ins, which she achieved in July 2020. This means she has helped well in excess of 4,000 families during her CRS tenure!

When asked how she was able to achieve these milestones, Shelly said “By staying focused, and being determined to make my way into the Red Door Club. I really wanted my name on the wall.”

A true example of following the CRS Core Values, Shelly has exemplified every one of them, especially Compassionate Customer Focus. One story that stands out for Shelly is that when she was an RS, she was helping a single father and his children who had lost their home to a fire right around Christmas. She called the local Home Depot and bought a tree, and they donated ornaments. She asked the landlord of the rented property to go to Home Depot and pick everything up. The landlord then set up the tree so when the family moved in, they had a decorated Christmas tree.

You might wonder what Shelly likes most about her job. She states, “Knowing that I am making a difference every day in someone’s life.”

She recalls her first day at CRS:  “When I arrived at the Phoenix Office for my interview, I  was greeted by Jessica Jensen (also a 20-year CRS veteran.) She was the receptionist at the time.

My first day working for CRS, I traveled to another Residence Specialist’s home, Colleen is her name, and she lived in Gilbert. I drove from Surprise to Gilbert and trained with her for 3 days. After the third day I started my own journey here at CRS.”

“Back then the RSs worked from home, so I worked out of my bedroom which was my home office.

Training back then consisted of going over the housing IC and how to search, there was no such thing as Salesforce. I would do my daily updates on a Word doc and send over to my RM., My THA was sent from the office to the Policyholder by my Housing Specialist, which at one point in time was a role held by Hope Benefiel and Jessica Jensen. My THC which I believe is now the COT was on a FLOPPY DISK.  My, it sure has changed a lot. We did the work out of Placetrak before Salesforce was introduced.”

When asked what the biggest change she’s seen at CRS over her two decades, she replied “Most definitely the technology!”

Most, if not all of us, could not say we have been at the same job for 20 years. Shelly says that her biggest lesson learned is “That ‘my’ problems do not compare to what our CRS families are going through. What we do really puts your life into perspective. Don’t fret on small things, there are so many big things that can happen in one’s life.”

Shelly truly loves her job at CRS and plans to stick around a lot longer. What’s on her wish list for the next 10 years? “I love all the great things we do. I love interacting with the families. My wish is to continue to work with this amazing company. After 20 years I can honestly say, I STILL LOVE what I do.”

Born in Cleveland, Ohio, Shelly has lived in Arizona for 34 years. She has 2 Children, a son and a daughter both in their twenties. She and her husband of 25 years currently live in Surprise with Roxie, their 13-year-old golden retriever, and 2 cats, Freckles and Sunny.