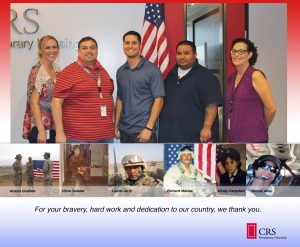 and the date was chosen to commemorate the signing of the armistice with Germany that ended hostilities during World War I.

Many observe Veterans Day by simply flying the U.S. flag at their house, having a picnic or cook out with friends and family, and watching war movies or other patriotic programming on TV. Many also donate to veterans’ causes and show appreciation to veterans they meet or are already acquainted with, and some veterans will donate their military uniforms on this day, making themselves “easy to spot.”

Four ideas on what to do in the U.S. on Veterans Day are:

Veterans Day is an important time to remember those who risked their lives to defend the freedom of others, and you will find there are many festive and patriotic activities to take part.

On this day of remembrance, we would like to acknowledge and thank our CRS employees who have proudly served our country: Acacia Oudinot, Vince Salazar, Lionel Jerry, Richard Macias, Mindy Campbell and Dennis Allen.

About the writer, Vince Salazar

Forged a career on stage as an actor, singer, dancer and musician ~ performing in over 200 major theatre touring companies over 20 years.

Headlined the show LEGENDS IN CONCERT in Las Vegas for over 10 years doing the Blues Brothers.

Recovered from a head-on car accident (left me in a wheel chair for over 2 years), and recently survived cancer.